I love potatoes. For years I didn’t eat them as I thought they were bad and full of yucky carbs. Now I realise they are probably the most bullied and forgotten super food of the 21st century. Just like eggs were in the 20th century. It’s time we took a good long hard look at the humble potato and start loving it again.

You probably have fond memories of eating potatoes. Whether baked, mashed, roasted, or BBQ – I still remember the first time Shaun cooked spuds on the BBQ…. they were a grey mush of nothingness. How his cooking skills have improved!! Potatoes are crowd-pleasers and a delicious comfort food aren’t they? I craved them during my first pregnancy, mashed with a huge spoonful of proper, English marmite…… yumm, well at the time… yumm.

Did you know the potato is the most popular vegetable in the world? There is a lot of discussion around whether potatoes are healthy or not, many nutritionists and health professionals recommend limiting potato consumption. And some food guides don’t even include potatoes in the vegetable group! Here are the three main reasons:

Let’s look into the weight concerns… A 2011 study conducted by at the Harvard T.H. Chan School of Public Health tracked the diet and lifestyle habits of 120,000 men and women for up to 20 years, looking at how small food choices contribute to weight gain over time. The researchers concluded that there’s a strong association between potatoes and weight gain. Potato consumption was also linked to increased risks of heart disease and type 2 diabetes, as well.

In my humble opinion, potatoes are not the enemy! How we eat them is. While many of us eat veggies, like spinach and broccoli, in their natural state, we eat most of our potatoes processed or fried as chips and French fries. Even our baked or boiled potatoes are often peeled (losing the vitamins, minerals, and fibre found in the skin), mashed with loads of butter or loaded with fatty toppings sour cream and cheese. But, in a study in the Journal of the American College of Nutrition in 2014, researchers found that when people followed healthy recipes, they lost weight even while eating five to seven servings of potatoes per week.

So it looks like potatoes are not the answer seems to be in their preparation, what you eat with them, and how they fit into your overall diet that matters. Portion control is always at the forefront. Keep your potato portions to the size of your clenched fist, I actually go a little smaller than this for myself. 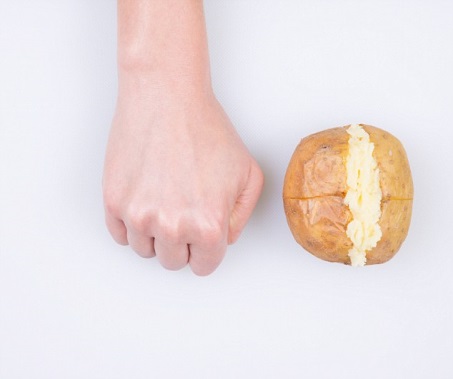 Is the potato a superfood? A superfood is defined as “that which is rich in compounds beneficial to a person’s health. So, it would be fair to say a spud a superfood. Potatoes are not just carbohydrates. They are a nutritious food that many healthy cultures have subsisted on.

Here are six reasons why we should be calling the spud a superfood.

One medium potato has 40 mg of vitamin C. Despite the loss of 30% of it in cooking, the remaining 15 mg makes up a fifth of the daily recommended intake. The next time a cold hits, pull out the potatoes, not just the orange juice!

3. Potatoes have a high satiety index

Among various foods tested for their ability to satisfy hunger, potatoes came out on top. Probably due to their capacity to keep hunger at bay, potatoes prepared healthfully (baked, roasted or microwaved) were shown to be a nutritious part of a balanced weight loss diet. Remembering portion control of course.

Potatoes have been shunned by many because of their high glycemic index (GI), a measure of a food’s capacity to raise blood glucose. This can be a problem for people with poor blood sugar control, like type II diabetics, who should limit their intake of high GI foods. Interestingly, studies have shown that cooling or adding vinegar substantially lowers the GI of potatoes. (Making them higher in resistant starch.)

4. Potatoes are brimming with important B vitamins

B vitamins are important for cell renewal, DNA and protein synthesis, energy production and synthesis of mood-boosting chemicals like serotonin. Potatoes provide a significant amount of the B vitamins too.

Vitamin C can help prevent everything from scurvy to the common cold, and potatoes are full of this nutrient, with about 45 percent of the recommended daily intake per medium baked potato.

Cooked and cooled potatoes contain amylose, which is resistant to digestion by the stomach and small intestine but feeds the good bacteria in the colon. There is a lot of recent research into resistant starch that I’ll do a blog on another time!

There you have it. The good old potato is not nutritionally empty, as we were made to believe. While you may be tempted to subsist on potatoes alone (they are delicious), portion control and moderation are key, like with all superfoods! As common sense and science tells us, nothing beats a balanced, diverse diet, rich in whole, unprocessed foods.